In the mid-1970s, two economists—friends and serious audiophiles—Dr. William Conrad and Dr. Lewis Johnson—were highly dissatisfied with the commercially available equipment of the time and were also perplexed and challenged by the readily apparent sonic differences among components in their own systems. What made these two classic tube systems sound so different? Could the virtues of each be somehow combined? Not content to merely speculate on such issues, Conrad and Johnson decided to systematically investigate by developing and refining a vacuum-tube preamplifier.

The resulting conrad-johnson preamplifier was immediately recognized as a state of the art contender and catapulted Conrad and Johnson into the audio industry.

The most important legacy of conrad-johnson design’s beginnings is the basic methodology which took shape in the course of the development of that first preamplifier. This methodology has enabled conrad-johnson to develop new products which have routinely been ranked among the most musically satisfying. Few other manufacturers have so consistently received such high praise for their products. 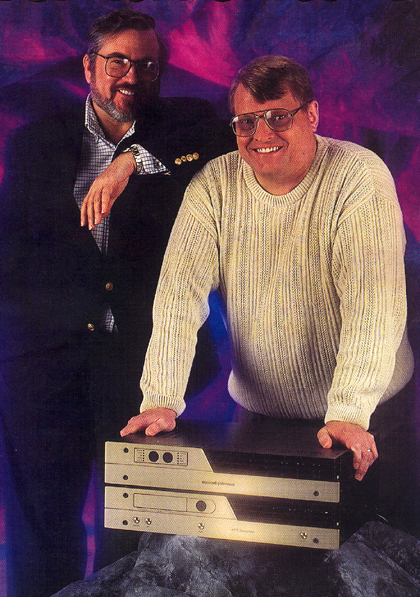 “Today there are basically two kinds of audiophiles: those who own Conrad-Johnson (CJ) gear and those who lust after it—a testimonial to the sustained relevance of this iconic brand since its launch in 1977.

CJ has always been a company by audiophiles for audiophiles, and for this all of us are most grateful. We wish the “dynamic duo” of Bill Conrad and Lew Johnson a happy and peaceful retirement, and in recognition of their seminal decades-long contributions to the audio arts, we are delighted to induct them into The Absolute Sound’s High-End Audio Hall of Fame.”

Click below to read the full induction at The Absolute Sound.

A Look Back at Bill Conrad and Lew Johnson’s 40 Years in High-End Audio
—by Myles B. Astor in Positive Feedback, December 17, 2017.

Bill Conrad and Lew Johnson had already made their mark as economists when they began building and selling their own vacuum-tube audio equipment in 1977, at a time when most audio shops were focused squarely on solid-state gear. After growing that enterprise into one of the most acclaimed brands in high-end audio, Conrad and Johnson have sold their company to longtime Senior Technician and current General Manager Jeff Fischel, who has been with the company since the late 1980s. The official transfer of ownership has been in the works for a while, and Fischel says that “Bill and Lew are still actively involved in marketing.”

During his tenure at Conrad-Johnson, Fischel was responsible for overseeing the development, engineering and production of some of the company’s highest-end products, including the Premier 7 dual-mono preamp and Premier 8 mono amplifier, various ART preamps and mono amps, as well as the GAT preamp and the TEA1 phono stage. He is quick to point out that he is obsessed with quality and has a “serious lust for vacuum-tube technology.”

Fischel says his considerable technical experience has led to the development of two new products planned for 2018. The first will be a flagship-level tube amplifier that will incorporate technology and a design approach “unlike anything we’ve ever used.” The second product will be the company’s first-ever headphone amplifier that, he says, “will use GAT-level parts and build quality.” He adds, “This product is designed for people who own the world’s best headphones.”

As Fischel looks to the future, he says that he is dedicated to continuing Conrad-Johnson’s single-minded commitment to producing equipment that is both musical and built to stand the test of time. Toward that end, he is working to develop a wider network of dealers who are willing to support “the company’s exacting quality standards.“